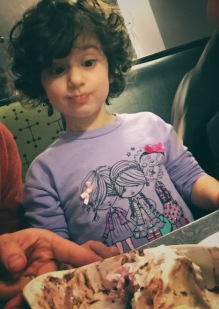 The kids were on school vacation for Presidents’ week, so we decided to pack up the car and head up to Boston for the long weekend.  We did all the usual touristy things there:  strolled through the Public Garden, stopped for lunch and shopping at Quincy Market, and discussed the possibility of our children ever actually attending Harvard.  And, we ate.  A lot.  But all four of us would probably agree that the best memory from the trip, hands down, was watching our youngest family member, Nili, not just eat, but actually devour, her first brownie ice cream sundae.  If food is love, then we could have drawn hearts in the chocolate smeared all over her adorable, smiling face.

Boston is a bigger, more cosmopolitan, more liberal and more food sophisticated city than our hometown.  It has food options, the likes of which we rarely see. For an allergic kid like Nili, it is a veritable food wonderland, where bakeries carry vegan pastries, and restaurants have dedicated nut free kitchens.  We watched her dig into a sundae with not one, but two flavors of coconut-based ice cream over a nut-free vegan brownie, with coconut whipped cream and non-dairy chocolate sauce drizzled on top.  Sounds delicious, doesn’t it?  No?  Okay, I know this doesn’t appeal to everyone, but to our little three-year-old princess, it was like fairies, rainbows and unicorns in a bowl!

It’s not that such food doesn’t exist where we live; it just isn’t readily available.  It takes some dedicated effort to either track it down or make it myself, neither of which I’m terribly diligent about doing.  I tell myself that she doesn’t need more fat and sugar, and that I’m not doing her any real favors by always making sure she has dessert. But the real truth is that it’s just lazy parenting.

I know other mothers of allergic children who always make sure to carry treats with them for any unplanned occasion so their child won’t feel left out.  But, Nili is a remarkably easy-going kid, allergies and all. Perhaps more importantly, food has not been the overwhelmingly positive experience for her that it is for most people.  (Sometimes, when watching my weight, I kind of wish food were a little less of a positive experience for me too.)  So, when faced with the possibility of hives or her throat swelling shut, she will usually just shrug her tiny shoulders and walk away.  Understandably so, and frankly, much easier for me.

In all honesty, those parents that I mentioned will tell you that their children don’t really miss the dessert either, and would probably never ask for it. It is more to assuage their own sense of guilt at depriving their kids; because if food is love, then, on some level, depriving your children of food, especially dessert, feels like depriving them of their fair share of love. I totally get that, even if I don’t keep cupcakes stuffed in my purse.

Psychologists, nutritionists and medical professionals will tell you that this is not true. Though both food and love stimulate the same dopamine systems in the brain, they are in fact different stimulants. They discourage us from conflating the two, for fear that it is precisely this mistake that is making Americans obese.  When we confuse the two, and we long for loving relationships, we engage in emotional eating—and far too much of it.  If we don’t want to get fat, or keep getting fatter, then we need to understand that food is not love.

An old friend of mine, who also happens to be a clinical social worker, will tell you that this is complete and utter bullshit.  From the moment we cuddle, coo and smile at our babies as we feed them, they begin to associate food with love.  As our children age a bit, we coax them with food, knowing they will perform when rewarded with our loving approval and our treats.  Moreover, those of us moms who enjoyed our own deluge of pleasure hormones as we breastfed our babies will also back her up on this.  In other words, whether we are giving or receiving, we absolutely connect food with love and feel-good emotion.  It is ridiculously hard not to.

From an evolutionary standpoint, we come by these traits honestly.  In a 2013 NPR report, journalist Jon Hamilton talks with biological and evolutionary anthropologists about various kinds of monkeys that, for all practical purposes, use food as love.  In families of marmoset and tamarin monkeys, all the adults, including mothers, fathers, and even older siblings will all find and present special treats to the youngest monkeys.  (Is it possible that my older son is not actually descended from monkeys?) They make a particular call and adopt a certain posture when they find something especially nutritious or tasty and offer it to the little ones.  Other monkeys, such as chimpanzees and bonobos take this behavior to the next level, offering food to monkeys outside of their own social groups to show caring, create friendships and strengthen alliances.

Is it really so wrong that I took such pleasure in watching my daughter eat?  After all, I am descended from monkeys and a Jewish mother.  If we hadn’t been so exhausted from touring Boston, I probably could have sat there and watched Nili eat all night long.  Food and love may not be identical, but they are pretty damn similar. Maybe someday I’ll have to pay for therapy to undo all the problems I’m creating, or maybe she’ll just have to watch her weight and emotional eating like the rest of us.  But for now, I’m just going to keep on feeding her with love.

One thought on “Food Really Is Love”

Hi, I'm Julie and I'm The Foodologist. This is my blog about food and culture. Please have a look around and follow me for regular updates!